Posted on: February 12th, 2018 by Rockway Mennonite Church No Comments 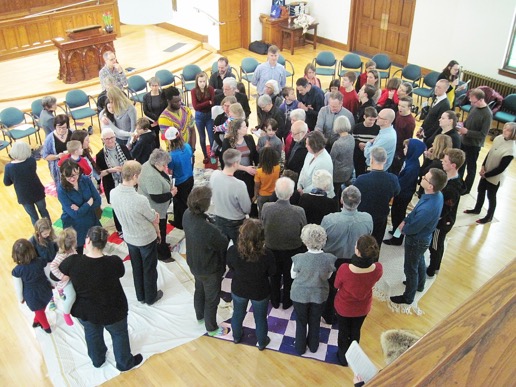 On our retreat Sunday, February 11, we took part in the Kairos Blanket Exercise, in which we “participated” in the experiences of Indigenous peoples over the five centuries of colonization following the arrival of European explorers and settlers in North America. Here, at the beginning of the exercise, everyone is standing on a set of contiguous blankets.

The Blanket Exercise is a teaching tool for sharing the historic and contemporary relationship between Indigenous and non-Indigenous peoples in Canada. We were led through the exercise on our retreat Sunday morning by Kandace Boos, Indigenous Neighbours Program Animator with MCC Ontario. Assisting her was Kaitlyn LaCroix, a Métis and a student in the Master of Social Work program at Wilfrid Laurier University.

First, all the congregants stood on several blankets in the middle of the sanctuary (see picture, page 1). They represented the Indigenous people who were occupying the land when the European settlers arrived. Kandace and Kaitlyn read from a script, portraying the history of the treatment of Indigenous peoples by white settlers and their governments. Occasionally, some of our members read from scrolls that had been handed out previously — government edicts, and comments by Indigenous leaders and others.

Slowly, the people standing were depleted in number. Some, who died from disease, went to sit on the chairs surrounding the sanctuary. Those in Newfoundland, who were wiped out by settlers and disease, were also sent to the chairs. Blankets began to be separated into reserves, with restrictions on interactions across the borders. A group of children was separated onto one blanket; these went to residential schools. And so it continued to the present day. 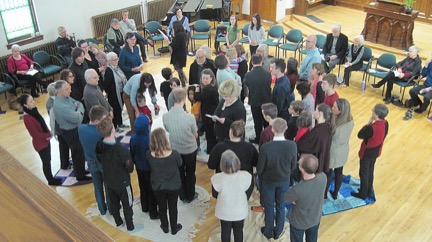 Well into the exercise, as Kandace (centre) reads from the script, many Indigenous people have died from disease (they are seated), and the rest have been segregated into reserves. At the top, two children represent those in residential schools.

After about 40 minutes, we sat in one large circle and reflected on the exercise for an hour or so. The microphone was passed around and about 20 people spoke of their feelings during the exercise and of past experiences that came to mind. B.E. recalled hearing about arrowheads found on her family farm. E.M. was reminded of a favourite teacher who she learned only later in life, was Indigenous. One of the youngsters noted the feeling of isolation in the “residential school”. Several noted their feelings of helplessness and lethargy as the exercise proceeded.

The Blanket Exercise has been used thousands of times over the past 20 years across Canada: with community, youth, and faith groups; in schools; as training for RCMP cadets; and more. It was used at seven provincial and territorial legislatures as well as on Parliament Hill from May 28 to June 5, 2016. That “Mass Blanket Exercise” marked the first anniversary of the release of the “94 Calls to Action” by Canada’s Truth and Reconciliation Commission on June 2, 2015. The “94 Calls to Action” is available as a pdf document.