Sabbatical reflections from the Yúcatan

Posted on: May 12th, 2018 by Rockway Mennonite Church No Comments

During the month of February, Mary and I were able to rent a small house in the city of Mérida, which is the capital city of the Yúcatan province of Mexico. With books along, a good internet connection for our laptops and a Mexican SIM card for my phone, we were able to work on our sabbatical projects, lest you be tempted to think that this was just a vacation! We were quite productive, and also had some time to explore the city and surrounding area. I’ve always found it stimulating to look at North American life and work from a different cultural perspective. 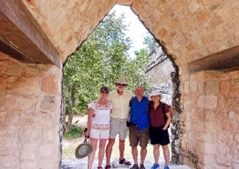 During our time here, it was a pleasure to spend time with H.M. and M.G. They have been coming to this area for many years and were very generous friends and guides. Here we are standing under the Mayan arch at the ruins of Ek Balam. One of the most fascinating aspects of this area is the wealth of ancient Mayan ruins and culture. The Mexican government has invested a great deal in uncovering and restoring many sites around the peninsula. The ancient cities, with their architecture, art and symbolism, are amazing to behold. And this culture is not just a thing of the past, even though the Catholic Church and Franciscan order did their best to eradicate the Mayan language and religion. Currently, approximately half of the population of the Yúcatan speaks Mayan. Due to the influx of tourism, particularly on the Caribbean side of the peninsula (Cancún and Playa del Carmen), the number of native speakers is decreasing. However, efforts are now being made to teach the language more widely in the public school system. 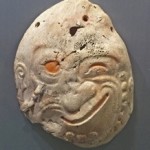 When the Franciscans came in the 16th century, they discovered a great deal of affinity between the Christian and Mayan symbols. The native peoples seemed to convert quite readily to the religion of Rome — not that they really had a choice! The basic cosmogram of the Maya was the cross, symbolizing the four directions. Mayan priests would draw their own blood in religious rituals in an attempt to please the gods. They also practised human sacrifice. Therefore the image of Jesus on the cross, a human sacrifice, shedding his blood for the sins of the world and to please the great god above, made a lot of sense to them. The Maya also had a complex understanding of the realms of the underworld, material plane and heaven. The Spaniards were frustrated that despite their best efforts, the people continued to practise their own rituals alongside those of their new Catholic faith. The farmers would still make offerings to Chaac, the rain god, toward the end of the dry season. They still called upon the local shaman when there was sickness or evidence of a curse. To this day, farmers’ cooperatives conduct rituals to Chaac in the cornfields and happily go to Mass on Saturday night. In the city museum, there is an ancient Mayan mask that seems to sum up the relationship with Catholicism quite well. They say to the local Catholic priest, “Por supuesto Padre, somos Católicos muy buenos!” (Of course Father, we’re good Catholics!)

One of the most enjoyable things about city life here is the activity and music in the local plazas. Every night of the week, there are concerts free of charge for the public. Every Sunday is like a special holiday, with folk dances, food vendors, live bands and activities for families. One also sees evidence of the less than healthy aspects of western culture. Just like us, many are addicted to their cell phones, starting at a very young age. And the shops and grocery stores are stocked full of refined sugars and carbs. Coca Cola does a booming business in the Yúcatan. Another enjoyable thing is the weather. Every day during February, the temperature was in the low 30s, with sunny skies. But all was not easy. We had to carry our own water!

I think of Rockway often and hope that church life is going well. I look forward to returning in May with new energy and vision for ministry. See you soon.